The work of The Underground Detective may always have room for some surprises, but it’s rare that an assignment seeking out an old foundation can involve a search of the nighttime skies. On a day-to-day basis, the norm for our underground searches involves utility locating and mapping, vacuum excavation, grave site detection, or sewer inspections. So, it’s rather unusual to be looking underground for something that once served as examination of the heavens.

In the case of a recent assignment, the celestial examination was that of the Cincinnati Latitude Observatory which operated from 1899 to 1915. The observatory was part of a system of an early international astronomical program supporting geodesy research. 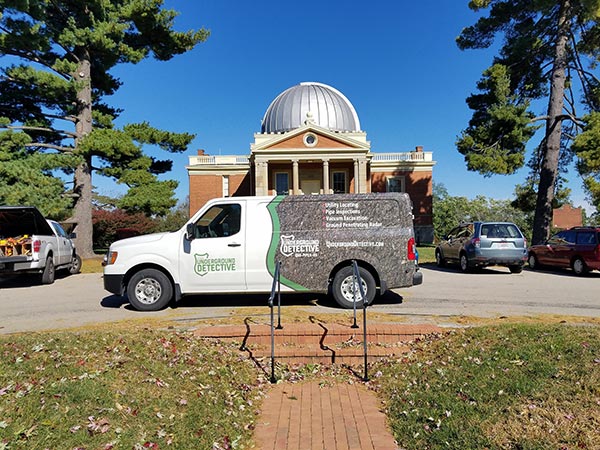 If you don’t recall geodesy from your grade school or high school science programs, it’s possible that it wasn’t included. Geodesy, a branch of mathematics that deals with measuring several properties of the earth, including its shape, its orientation in space and its gravity field. The latitude observatories measured the “wobble” of the earth on its axis and that research is part of the foundation of GPS technology. 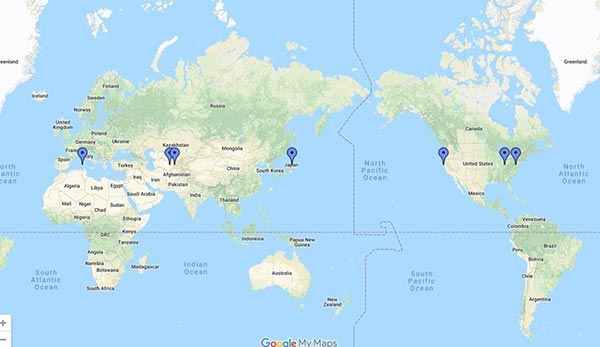 Dave Doyle, of Base 9 Geodetic Consulting Services, provided this background about the observatory and the role The Underground Detective’s ground penetrating radar had in successfully locating the remains of the foundation of the telescope pillar for the Cincinnati Latitude Observatory.

“I personally am very grateful for your support of our effort to recover the foundation for the telescope pillar for the Cincinnati Latitude Observatory…We have been in negotiation with the Cincinnati Observatory and the University of Cincinnati for the past two years to try and recover and eventually remark and commemorate this site for its contribution to the science of geodesy and specifically its role in helping determine the magnitude of how the earth wobbles on its axis. The pier that supported the telescope here had been removed many years ago, and there was nothing at ground level that gives any indication of its location.

This unusual and fascinating project came by way of the Professional Land Surveyors of Ohio (PLSO), who had agreed to help out the Surveyor’s Historical Society as a volunteer community outreach project. Dave, who had been involved with the latitude observatory program at the National Geodetic Survey, was aware of the Cincinnati site, and made contact with the Cincinnati Observatory Center about the possibility of locating the foundation for the telescope pillar.

The project required approval from University of Cincinnati, who owns the site on which the Cincinnati Latitude Observatory stood. While it took a couple years to obtain that approval, it was only a matter of minutes for The Underground Detective to locate the telescope pillar foundation.

Dave reflected, “We thought we had a pretty good idea of where it was, but your GPR really helped nail it down. We were very lucky that the remains were quite shallow. We had anticipated that it could have been several feet.”

A short video about the Gaithersburg latitude observatory site provides insight about how the one in Cincinnati would have looked and operated. Just consider that Cincinnati, along with this site in Gaithersburg, MD, was a part of network of observatories around the globe that served a common international scientific research objective. 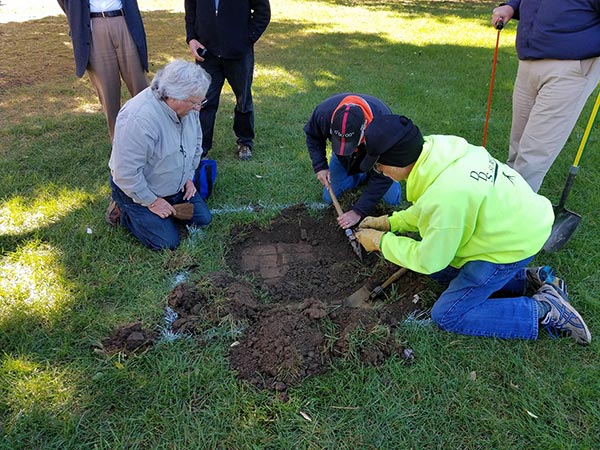 For The Underground Detective, this was more than a search beneath the soil. It was a look back in time, around the world and out to the stars, all at once!