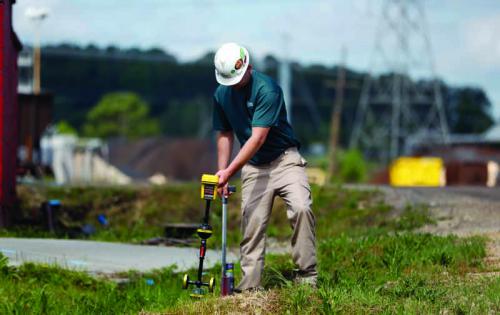 Below is an excerpt taken from Cleaner Magazine’s “Locating Firm Finds Opportunities for Growth” that talks about the different underground locating jobs we’ve done.

From Time Capsules to Cemeteries

While utility locating may be The Underground Detective’s forte, it is not the only area in which the company’s equipment and expertise are useful. Occasionally the Cincinnati-based company is called on to be true detectives, searching for items beneath the surface that don’t even have a helpful starting point, such as an above-ground valve or manhole.

A couple years ago, the company was contacted via Facebook by the National Trail School in New Paris, Ohio. A former student had reminded the school about a forgotten time capsule that had been buried somewhere on the property in 1978. The location of the time capsule was narrowed down some by those who recalled the day it was buried. But that only narrowed it down to the general area of the employee/student parking lot.

The Underground Detective selected a day in which school was not in session so a tech could freely scan the entire area and got to work with ground-penetrating radar (MALA GeoScience). Within two hours, the time capsule was located. A few weeks later, a crew dug up the area the tech had marked. Unfortunately, the excitement of unearthing the capsule was dampened somewhat when it was discovered that the contents had suffered extensive water damage during their 30-plus years underground. Still, the school’s staff and students were excited that the capsule had been located as they hadn’t had any luck until The Underground Detective got involved, says company president Rob Harris. The company was even invited to the banquet for the opening of the capsule, where the tech who did the locating was recognized for his efforts.

“It was a great event to be a part of and an exciting change from the ordinary locating that we often do,” Harris says.

Another opportunity that allows the company to get away from “typical” locating work is cemetery restoration. The Underground Detective sometimes is called on to locate unmarked grave sites.

“Those are fun jobs,” Harris says. “They’re interesting. We don’t do a ton of work with cemetery restoration, but we do more than you would think. We might do about one to three a month.”

On one such job last year, the company was asked to assist in confirming locations for both marked and unmarked gravesites at the Old Green Castle Cemetery in Dayton, Ohio — a cemetery of more than 200 burial sites, mostly Civil War soldiers. Like the time capsule job, GPR technology proved beneficial. The Underground Detective used it to locate nine unmarked gravesites in the cemetery. Harris says GPR is perfect for such a task because it uses nondestructive electromagnetic radiation waves and is able to provide a view below the surface without disturbing it.

“With GPR, we were able to determine exactly where graves were so that they could be properly marked and/or moved to a new site.”

Using GPR Scanning to Help Dig Up the Past

No Bones About It: GPR Gets the Job Done! 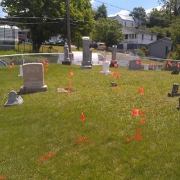 An Underground Search Points to the Stars
Scroll to top